Forté traveled to Wells Fargo Arena on December 1, to compete at the annual ISDTA. Similar to previous years, they performed three routines: military, pom, and class kick. This year, Forté danced to “Torn” for military, “Pump” for pom, and “Little Bird” for kick. They placed 1st for Large School Military, 2nd for Class XI pom, and 3rd in Class III kick. They received Division 1 Ratings for every song, the highest rating a team can receive at this competition.

Along with dance awards, PHS’s 2017-18 Forté group received the Academic Excellence Award. This is given to dance teams whose members’ GPA’s average to a 3.5 or higher. According to senior Erica Nossaman, a school winning places in every category is very rare.

“In practice, we all have a lot of fun, but we also work hard at the same time. Especially when we get close to State, our practices are more intense,” elaborated Nossaman. 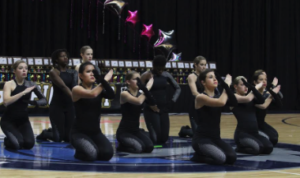