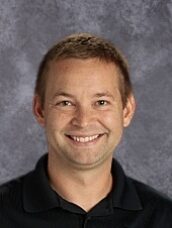 I began teaching Math and Project Lead the Way for Pella Schools in 2013. I also have been the Lady Dutch Tennis Coach since 2013. Prior to teaching for Pella, I taught High School Math in Chariton and Knoxville and coached Boys’ Tennis at both locations. I received my Secondary Math degree from Central College in 2008.

On October 12, 2013 I married my wife, Nathalie. Three years later (almost to the day), on October 9, 2016 we welcomed our first child, Jasper. Our second son, Owen, was born on June 15, 2018. In my free time, I enjoy throwing a nice brisket on the smoker and eating said brisket 13-16 hours later. I also like to spend some time on the golf course, making sure to get my money’s worth by taking more shots than most.