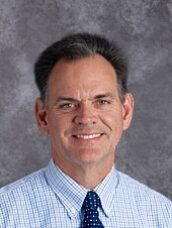 I graduated from Pella High in 1981 and Central College in 1985. After four years of teaching secondary language arts, I started work on a master’s degree in counseling at Northwest Missouri State. I spent seven years counseling at elementary schools in SE Polk and West Des Moines districts before entering administration in 1996. My master’s in administration came from Drake University along with a superintendent’s license. I came back to Pella at Madison Elementary in 2012. My wife works in the education department at Central College. We have one daughter who is practicing law in Oskaloosa. We love being in Pella!